Jersey cows originated from English Channel Island of Jersey, a few kilometres from the coast of France. They were first introduced to Australia in 1829 and spread throughout Australia with the Australian Jersey Herd Society being formed in the early 1900’s. Jersey cattle are generally characterised as being a hardy, small breed with high milk composition (protein and butterfat percentage) and medium milk yield. They are typically a light cream to dark brown in colour. Holstein Friesian cows can be traced back more than 2000 years.  They were first imported into Australia in the mid 1800’s. The name Holstein Friesian is derived from the province of Friesland in the Netherlands and Schleswig-Holstein in the Rhine delta region. They are characterized as being a versatile,

large breed with medium milk composition and high milk yield. The breed’s colour is typically black and white, ranging from almost totally white to totally black. They are the most numerous dairy breed in Australia making up more than 60 % of commercial milking cows in Australia. Ayreshire cows originated from Ayr in the southwest of Scotland. They were first imported into Australia in the 1850’s. The breed’s coat colour can vary greatly from any shade of red or brown with white or mahogany. They are characterized as having a medium to high milk composition and medium to high milk yield. There are only few whole Ayreshire herds being commercially milked in Australia. Illawarra cows originated from cross breeding a number of breeds in the Illawarra region of New South Wales. They have been recognized as an individual breed since 1910. Coat colour is predominantly rich red, though some cattle are either roam or red with a little white on the flanks.  They are characterized as an extremely hardy breed with medium too high milk yield and high milk protein content and medium milk fat content.

Different breeds of milking cows produce different amounts of milk components and milk volume. Some typical values are tabled below. 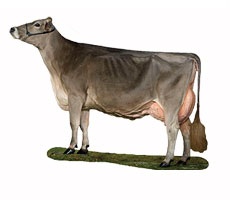 Numerous other pure breeds exist making up a minor proportion of the total commercial milk cows in Australia. Some other breeds include milking shorthorns, Guensey’s, Devons and Brown Swiss. However, there is a large amount of commercial dairy cows in Australia that are a cross between any combinations of the breeds above.

Name this space and WIN!